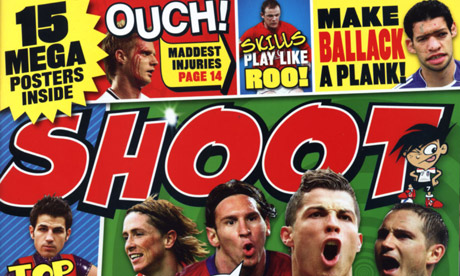 All you football fans out there, listen up! There is a new football themed pokie out, ready to satisfy both the gambler and the interest in the ever popular game of football.

This new slot machine is simply called Shoot! It is powered by those unbeatable providers of gaming software at Microgaming. And just to keep it in the football lingo, Microgaming has scored hat trick developing this machine. It is fun, it is entertaining and it combines two great hobbies - gambling and football!

The name Shoot! is meant as a celebration of the renowned and football magazine with the same name. The magazine has been around since the 60's and is still going strong. The machine features football players from the 1960's, 70's, and 80's.

Shoot! of course offers both wilds, scatters and free spins, but to heighten the thrill of the game three bonus rounds are possible to reach as well.

In dedication to the Shoot! magazine the scatter symbol is represented by a retro style football card, as such football cards were often included in the magazine. Two scatters doubles your winnings, while three scatters or even more opens up the bonus features of the game.

There are three bonus rounds in this slot machine - the Trade 'Em Bonus, the Free Spins Bonus and last but definitely not least, the Magazine Bonus. All three features are great fun.

When you are launched into the Free Spins bonus round, there is a button on a toy scoreboard that will need to be pressed to gain free spins. The number of free spins which will range from 10 to 35 will be revealed and the free spins will come with a 2 times multiplier!

The Magazine Bonus is the most exciting bonus. In the Magazine Bonus game you pick from 12 Shoot! Magazines that are scattered all over the vintage carpet of something reminiscent of a 60's or 70's bedroom. This bonus feature works in the way, that you get to pick cards to win coins until a red suited card is chosen, and the round is over.

As you would expect from Microgaming, the Shoot! slot machine is a delight both in features, graphics and game play- So let the referee blow the whistle to get this game started!